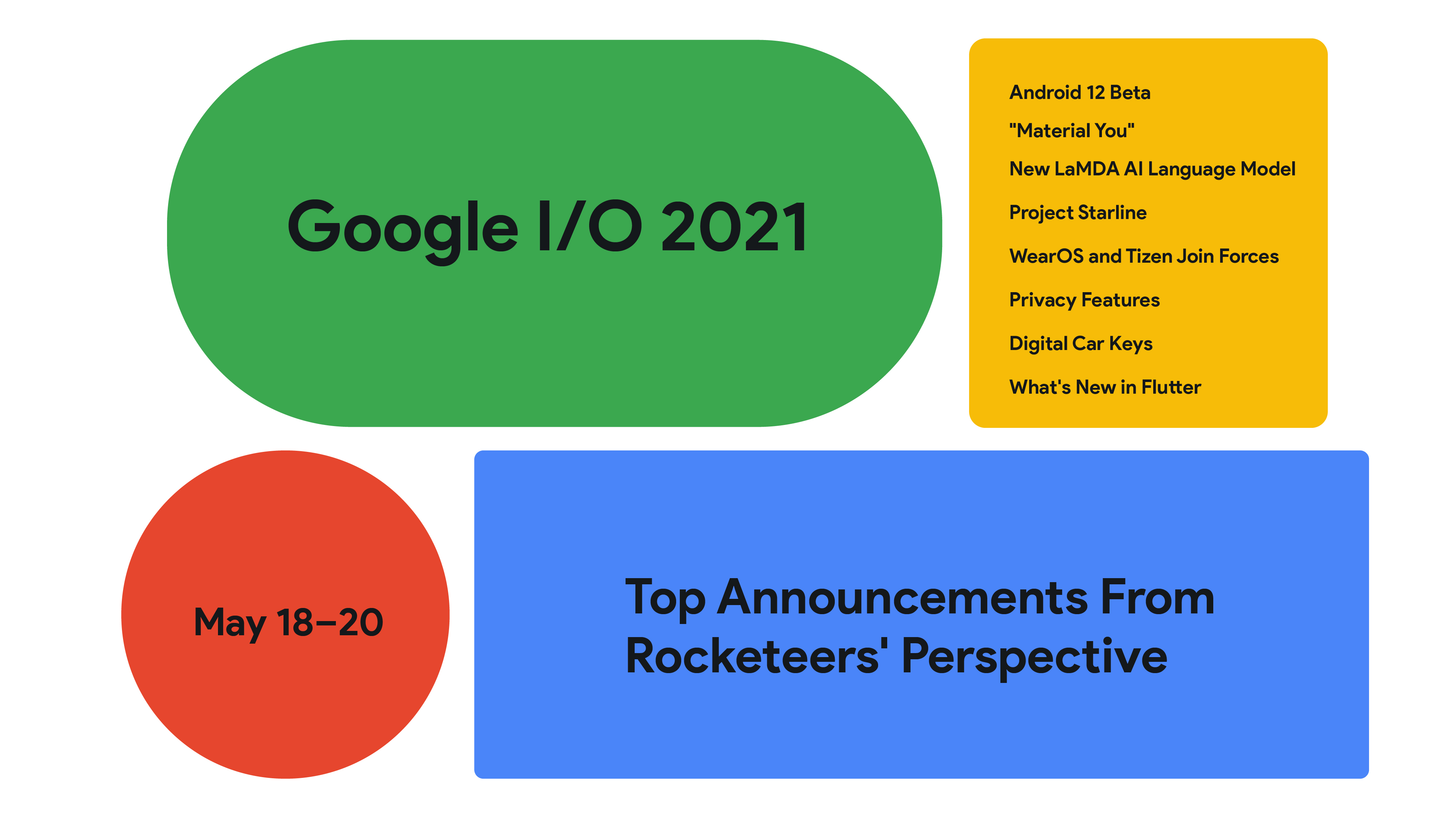 Google held the first-ever 100% virtual I/O this year! There are many existing announcements made during the 3-day online conference last week. We’ve collected the following information based on our Rocketeer’s input that provides brief introductions and concise reasons why we think they’re of relatively high importance:

The first Android 12 Beta was unveiled and there’s a lot to explore — including “Material You” which is the biggest design change in Android’s history (we’ll discuss more below), new privacy features and a new standard called Performance Class that lets apps and users identify high-performing devices. There will be 3 more planned Beta releases before the production version become available in Fall. It’s important for Development and QA teams to try the new features and test existing apps for compatibility to plan for updates as needed. While Android 10 is still the most popular OS for Android phones, the exciting new features Android 12 offers will likely gain fast adoption rate once it rolls out!

Back in 2014, Google introduced Material Design to create a “system for building bold, beautiful, and consistent digital experiences.”
This year, Google unveiled “Material You” which is a new approach to design. It’ll allow the users to pick from customized palettes for the system and apps (Instead of Google dictating the color palette.)
It’d be important for us to understand the impact of this new approach as we work with our Strategy / design team to determine how to meet client needs and maintain consistency between the look & feel of our own apps and all Google products.
From product perspective this means the UI will be more personalized for each individual user while maintaining consistency with other system or apps look and feel.

LaMDA is an AI Language Model for Dialog Applications. It’s open domain and designed to converse on any topic. While it’s still in research and development, Google has been using it internally to explore novel interactions. It’s intended to create more human responses to help keep conversations going by leveraging learned concepts built out of its training models.
We think there are interesting implications for chatbot usages in the future and it could provide a powerful way to handle support in the future when more models exist that incorporate other facets of communication. The better organized your data is now, the better these automated chatbots will be able to represent your brand.

The Google I/O demo of Project Starline showed an impressive look at a possible future for a more immersive “face to face” style of videoconferencing with people not in your current physical location. The technology uses custom built and highly specialized hardware, including “… a breakthrough light field display system that creates a sense of volume and depth that can be experienced without the need for additional glasses or headsets.”.
It is currently just deployed in just a few Google locations but Google’s goal “… is to make this technology more affordable and accessible, including bringing some of these technical advancements into our suite of communication products”.
Basically, in the short term we should start to see improvements in existing Google products and services and in the long term we can hope to experience products based off Project Starline’s tech for ourselves.

Google has been trying to enter the smart phone/wearable market since 2014 but has never gained traction. While Apple represented over half of the market share since its introduction, Google has never managed to make it out of the “other” category. However, this year Google has been making major moves in the space.
In January Google finalized acquisition of Fitbit, and now they have announced a partnership with Samsung to create a unified opensource operating system for use across Google watches, Samsung watches, and high-end Fitbit devices. Google is also making a bid to lure back customers by moving many or its core apps to smartwatch in a meaningful way, and developers by introducing the Jetpack tiles library. It’s still early to see if Google and Samsung can finally end the fragmentation that has made meaningfully developing for watches so difficult, but if they pull it off it a could mean a lot more apps entering the smart watch market, and create a virtuous cycle of increased adoption.

Privacy is a huge focus area for Google, and we think the following major announcements related to user privacy are worth noting:

With enhanced privacy features, apps can be more trust-worthy to the users. On the other hand, these new privacy policies will have impact on digital advertising and data gathering. So it’s important to keep the privacy control in mind while designing new or updating existing apps.

Android 12 will now support the ability to use your phone as your car keys, if you have one of a few newer pixel devices, AND own one of a very few brand-new cars. This move closely mirrors a similar announcement from Apple last year and has similar features. If you happen to have the correct combination of phone and car you may even be able to unlock your car with your phone still in your pocket (using Ultra-Wideband) where users previously had to settle for waving their phones at the door to make the magic happen.

Flutter continues its advance to become the UI toolkit of choice for cross-platform. Google and a growing team of open source contributors released Flutter 2.2 and its accompanying Dart 2.13 upgrade. This release focuses on quality, performance, and productivity.

Support for web grew closer to par with mobile with improvements to caching, rendering, and accessibility. Web support also enables the Flutter team to immediately showcase features to developers. https://photobooth.flutter.dev/#/

Industry Acceptance: BMW (300 engineers), WeChat (1.2 billion users), and NuBank were some of the industry names that have migrated their development to Flutter. Case studies were presented that give weight to around a 30% speedup in development time for Flutter with the added benefit of adding support for additional platforms.

With support for ARM64 Linux, which runs much of the embedded world, envision a future where, if it has a screen, you can target it with Flutter.

For a complete rundown, please check out all content in Google I/O and see What’s New In Flutter medium post for more details for Flutter news.